A Multi-national band, 45RPM takes it’s audience on a magical journey back to the music that changed rock history. Faithfully reproducing the hits of the British invasion and America’s musical response! 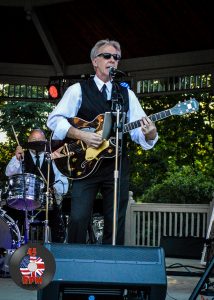 A native of Nottingham, England. Richard started playing the guitar aged 15 after his sister discarded the Beatle songbook she had and let Richard learn on her guitar. He recalls “I remember walking to where a friend of my elder sister lived and buying from her a copy of “A Hard Days Night”. I must have played that LP 1000 times!” A move to Indiana through work in the late 80’s gave Richard a chance to play in Evansville before a move to Indianapolis in 1996. Work and family caused live work to dry up for some time but the last 3 years has seen him playing in a popular north side band “The Bloody ‘ells!” and most recently with Buckshot Shaker. When the chance to join 45RPMcame along , it was a chance not to be missed and let Richard play the music he grew up with….. a return to where he first started with that battered old Beatle songbook.

Pat began playing music at 4 when his father discovered he was cursed with perfect pitch. Once in his teens, he began playing organ in local high school bands when he took the call from the Dawn Five, performing until the band dissolved, after which he joined up with the Boys Next Door. Drafted in 1972, he was the pianist for the 2nd Armored Division in Fort Hood, Texas for the next two years. He played in local Indy bands after completing military service, the most recent being the “Ike & Jonesey’s” house band playing Tower of Power, Blues Brothers, and other R&B songs for Ricky Eicholtz the next 19 years. A welcome addition to 45 RPM, he loves playing the Sir George Martin-scored Beatles songs (string quartet on “Eleanor Rigby”, full orchestra on “Penny Lane”, “Golden Slumbers”, etc.), further enlarging the band’s Beatles’ catalog (and his keyboard rig as well!). When not performing, he restores analog synthesizers from the 60’s & 70’s here in Indianapolis. 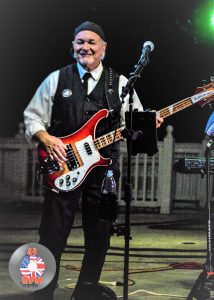 Jack began playing guitar with Chicago’s legendary Ryells at the age of 12. Shifting to bass, because he liked the “big tuning keys”, the band enjoyed considerable success thru the mid and late 60s. Moving to Indianapolis, Jack married Barb and “never got out of Dodge!” He and Doug Wilson have collaborated on several projects including Factory Air, PK And The Big Stir, Playing in Traffic, and now 45RPM. He still performs occasionally with The Temptations Las Vegas Review, The Ryells and The So They Say Band.  Jack notes, “there is no better time machine than music. I love playing the melodic bass lines of these 60s hits!” Jack is a former AT&T executive and small business owner. 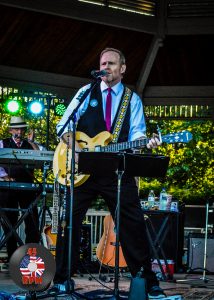 Bill Rumely hails from LaPorte, Indiana. He has played a solo acoustic act for many years, combining traditional folk  tunes with 60s and 70s singer/songwriter fare as well as venturing into acoustic renditions of rock songs. Playing in45RPM is his first venture into a full time band. Prior to this, he had gathered with other musicians to form limited duty bands (Class Trip; Ray & the Pacemakers). He was 11 when the Beatles hit America, so the 60s music is close to his heart. When not playing music, Bill performs live as an attorney in Indianapolis and a high school volleyball coach in New Palestine. 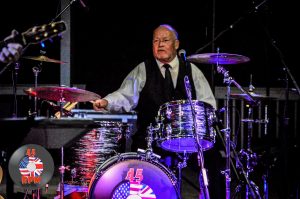 Totally consumed by the music of The Beatles and The British Invasion, Doug began playing drums at age 10. He played in numerous bands through high school and beyond. After becoming a father in his early 20s, he retired from playing music for over 30 years. About 15 years ago he began to play again, along with bassist Jack Fazio. They’ve been the “rhythm section” for several bands along the way, culminating in the fulfillment of a dream of going full circle back to the music of the mid-60s and British Invasion with 45 RPM! He also has been able to satisfy another dream by purchasing a set of Ludwig “Liverpool Legacy” drums. They are identical to the sets played by Ringo Starr in The Beatles and are his pride and joy. Just ask him! He will be glad to discuss them with you! Having retired from a career in sales in late 2020, he is thrilled to be providing the backbeat for 45 RPM.